For over two decades, Biggers has been developing a singular body of work that is deeply informed by African American history and traditions, and sustains a rich dialog with contemporary art on a national and international level, referencing urban culture, the body, sacred geometry, and American symbolism.

The title of the Bronx Museum exhibition, Codeswitch, refers to both the artists’ quilt series known as the Codex series and to the idea of code-switching itself, or shifting from one linguistic code to another depending on the social context. The Codex series includes mixed media paintings and sculptures done directly on or made from pre-1900 antique quilts. This process, like linguistic code-switching, recognizes language plurality, as the quilts signal their original creator’s intent as well as the new layers of meaning given to them through Biggers’s artistic intervention.

In 2009, Biggers was commissioned by Hidden City Philadelphia, a month-long cultural project, to produce a work for the Mother Bethel African Methodist Episcopal Church, a stop on the Underground Railroad. As Biggers began to research the history of the Underground Railroad, he was intrigued by the long debated historical narrative that quilts doubled as signposts along escape routes throughout the 19th century. In a later essay about Biggers’ work, historian Kellie Jones states: “Some scholars have argued that African Americans in the antebellum period made quilts not simply as bed coverings but as devices to navigate the roads to freedom. Patterns were created, in fabric and stitching, that offered clues to safe places and areas of danger, times and locations as the ‘conductor’ moved the train north along the Underground Railroad. Quilts hung on fences, washing lines, or even trees displayed these messages that were ‘hidden in plain view.’” Inspired by those stories, Biggers created his first quilt-based works for the Philadelphia project, hanging traditional quilts that visually engaged the church’s stained glass windows, and also created a “celestial map” handout documenting the city’s Underground Railroad sites, with Mother Bethel as the North Star.

Sanford Biggers describes his process, “While working on the project about the Underground Railroad in Philadelphia, the idea struck me that Harriet Tubman was an astronaut, navigating the stars, night skies and her surroundings in the quest for freedom. After reading additional Underground Railroad lore that posited quilts may have been embedded with code and used as maps, I began to search out quilts from the 1800’s and add new layers of code through mark-making, painting, cutting, collaging and reconstruction. These quilts are an archive of an ongoing material conversation that acquires new meanings over time and transgenerational palimpsests for a future ethnography.  I’m also interested in the tension of working on these objects that hold so much cultural and artistic weight, like embellishing or perhaps defacing history.”

The tradition of quilt-making holds a significant place in American culture and has special resonance in African American communities as witnessed in the quilts by the Gee’s Bend — a small, insulated African American community in Alabama —  that has produced hundreds of quilts from the 19th century to the present. That tradition has been upheld by contemporary artists today, such as Faith Ringgold, Sam Gilliam and Biggers.

Sanford Biggers: Codeswitch is a joint collaboration between The Bronx Museum of the Arts and Rivers Institute for Contemporary Art & Thought, New Orleans, overseen by Sergio Bessa (Bronx Museum Curator) and Andrea Andersson, (Founding Director and Chief Curator, Rivers Institute). After closing at The Bronx Museum of the Arts on April 4, 2021, Sanford Biggers: Codeswitch will travel to the California African American Museum (CAAM) in Los Angeles, where it will open in coordination with Frieze Los Angles on July 28, 2021 and will close on February 6, 2022.

To view a 360˚ virtual version of this exhibition, please click here*

* Links to videos and information about each piece are included. © 2020 Virtual Gallery Presented by MaskConsortium.com 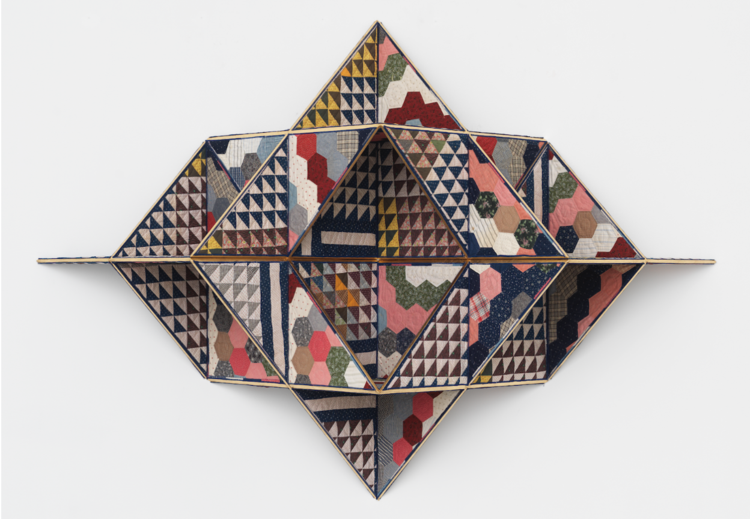 Introduction by the Artist

Watch this video of Sanford Biggers welcoming guests to the exhibition. In this video, Biggers gives us some background on his connection to The Bronx Museum and how his work is inspired by Hip-Hop.

The catalog, co-published with Yale University Press, features essays by the curators Sergio Bessa and Andrea Andersson along with guest writers, documenting the entire series of quilts produced by the artist. The book includes a forward by Gregory Tate and a 20-page graphic work by John Jennings in collaboration with David Brame and Esperanza Bey.